One thing you cannot be on these rides is bored. No two days are the same, every corner reveals a different scene. We set of in good spirits, probably happy that we were leaving Courtenay, which you would only really visit if you had a strong interest in wheat!

We had a bit of uphill but then ten glorious kms of downhill. We reached St Julian-du-Sault in no time and had a terrible coffee for €1.10. We agreed that if we won the €60 million Euro Lotto we would pay someone to open a decent coffee and cake place. The town itself had some very handsome houses and it’s very close to the Yonne, which we crossed just after leaving. 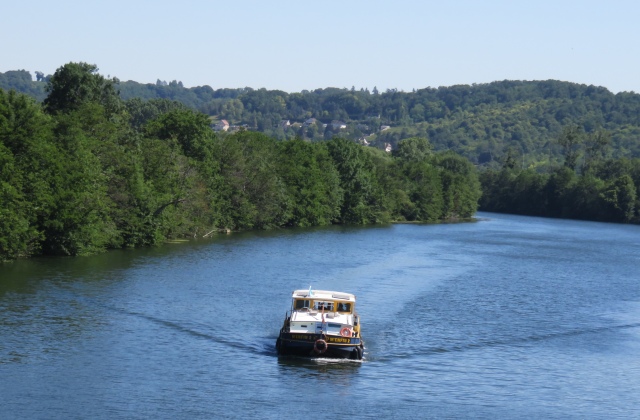 We had this fabulous cycle path to ride on next to the river – it lasted about 2 km and then it turned to gravel and pot holes. We were to discover that this was actually quite fabulous compared to what lay ahead.

This is not an official cycling route – it was planned using google earth and perhaps when those photos were taken, you could clearly see the river path – which as you can witness below, didn’t really exist – oh, and we saw not one cyclist all day! the scary thing was it was so overgrown that you couldn’t see where the greenery ended and the edge of the river was.

We reached the empty town of Joigny for lunch. Pretty town and we had good salads for lunch. Was it worth diverting via Courtenay to visit – probably not but alright for a quick stop off.

We then joined a similar track between Joigny and Auxerre. We came across an English gentleman who had a house on the river – all manicured lawns and flowers. He came out to talk and said it’s not really rideable and was surprised we had made it that far.

We cut inland, went wrong a bit, joined the major road system and finally, after much discussion between the map readers, took a completely new route in to Auxerre. almost five hours in the seat in afternoon high temperatures.

We are in a converted barn with a mezzanine bedroom, Tony is around the corner. Auxerre so far seems gorgeous. We are just off a Main Street in the old town. There is work for Duncan to do, end of tax year crap, washing, haircuts, shopping, cooking and some rest for the bums, which after yesterday we are in dire need of. Three days here which will include a ride out to Chablis.