This was Tony’s last ride with us, so we made sure it was a good one. It was mostly flat along the canal until we reached Santenay. It was also Bastille Day – 14th July.

A small hiccup at the beginning as Duncan’s bike was clicking on every wheel turn. Worked out this was the break pads on the front wheel. Totally worn out. Fiddled with to hold us through to Beaune where they would get replaced.

First stop Chalon-sur-Saône for a coffee. The Tour went through here on the 12th and we managed to avoid that event (on purpose). They were removing bollards and the locals enjoyed shouting at us as we cycled by, including “you are late” and “you are going the wrong way”. We did manage to get the photo below as a reminder.

The canal ride was fast and pleasant. Quite a few cyclists. The family below made us smile – the kids were obviously told if they wanted it on the trip, they would have to carry it. 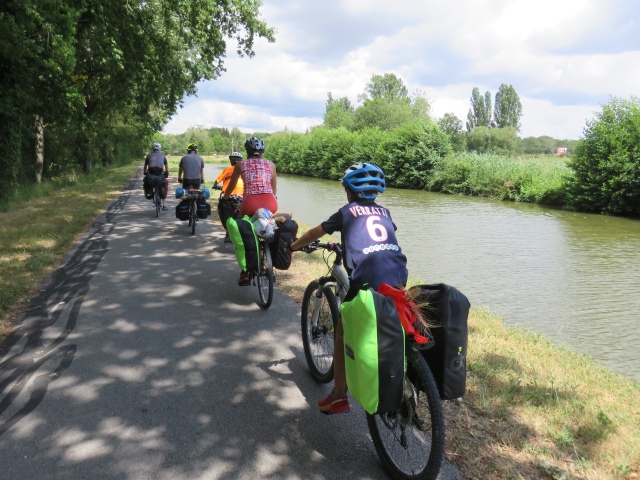 Duncan and Julie visited Santenay in 2001 along with Montrachet and Meursault. We said at the time it would be s great place to be on a bike. Today we cycled through some great wine towns and the vineyards in between. Highly recommend cycling in this region.

Some villages had been tarted up and were more touristy than others but it was a fabulous ride. Lunch in Santenay (below). There seemed to be half locals and half cyclists at the restaurant and there isn’t even a second glance when you turn up wearing Lycra. Unlike the UK, there isn’t even a tut tut!

The wine has improved significantly too. It wouldn’t be too hard to fill the cellar with a few winery drop ins. Unfortunately, shipping to Australia with its tax implications make it impossibly expensive but to the UK we may have more luck.

staying in Beaune until Saturday. Strange but comfortable converted barrel room just outside the town walls. We have a patio garden and plenty of space. Tony two doors down but he leaves on the 6.30 train tomorrow heading for Amsterdam and believe it or not, without a bike (see how long that lasts Tony!). It’s been a grand adventure – So long and we will see you back in Yallingup early October. 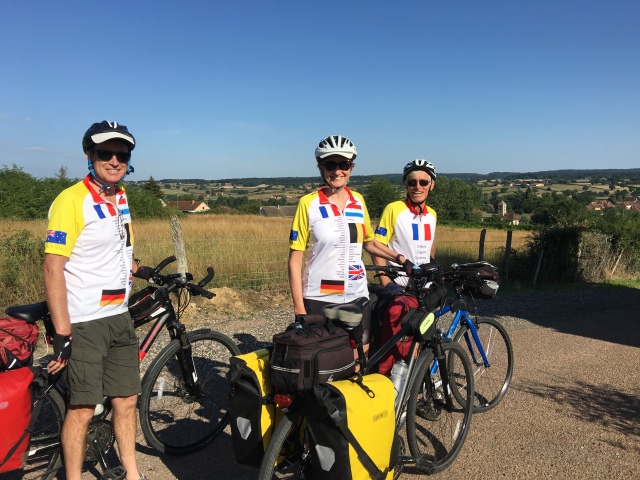