We started out from Zetting on just a perfect morning – smooth riding, sunny, coolish, pretty little towns and river banks, very peaceful with the odd fast cyclists out for the usual Sunday morning rides. Perfect. We had been served a good breakfast but no Croissants 😦 Last photos from France. The village in which we stayed – boats on the River and a clever way to get the message across. 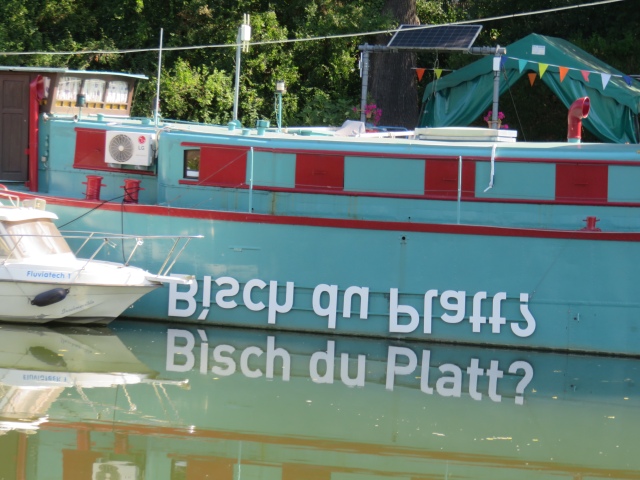 We turn a bend and then this – We have left France. After almost six weeks. We crossed the border after only one hour from Zetting. Welcome to Germany. 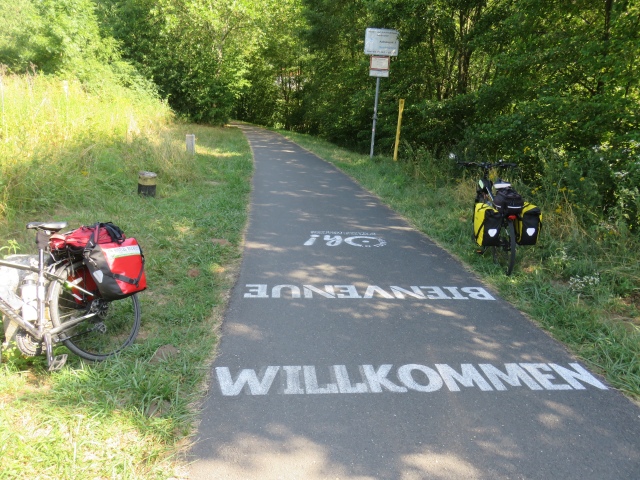 The route was pretty much following the River Saar. The GPS went slightly bonkers but we did literally ride alongside the river the whole way. 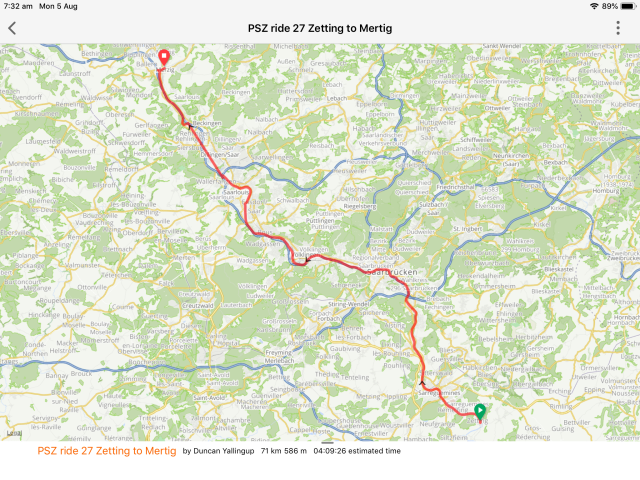 There were immediate differences between France and Germany and not just the language. We understand a bit of German and most Germans you meet speak excellent English. Julie’s been used to saying Good Morning for many years in the fashion of “Allo Allo”, so it’s “Gut Moaning” and finds it difficult to say it correctly and therefore will be just using Guten Tag instead just to be on the safe side. Duncan can order beers, the bill and say thank you in many languages.

We were on the outskirts of Saarbrücken. It’s a big city and it was having an annual Fair so it was pretty chaotic and there were Police and Security everywhere and as the Fair was on both sides of the river and using the actual cycle path, we had to dismount and walk with the bikes.

As luck would have it at the Fair – a coffee bike. Served a spectacular coffee, about 70% as good as home and quite a bit less in cost than France, so that’s a good start. While we drank this, watched a game they were playing beside us, a beer crate Jenga, suspended five metres in the air. Ask me about it ….

This area is very, very industrial – steel. Large barges full of coal, massive plants which ran for 25 km minimum with pipes, towers and a multitude of other heavy industry. All alongside the river and if that wasn’t enough, the major highway ran alongside the bike path for many of those kms. it was NOT a quiet ride! 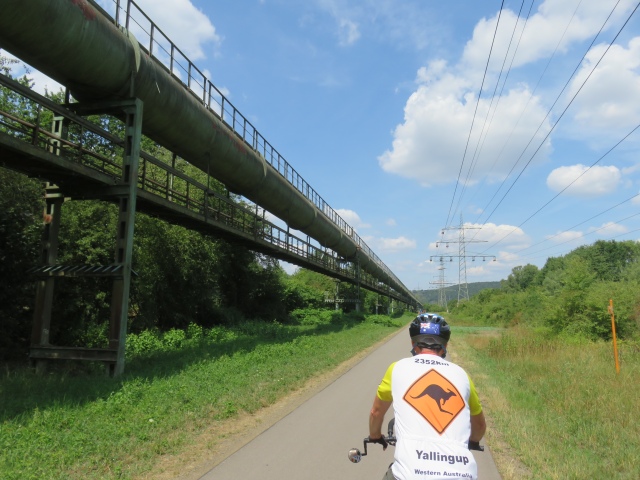 So, let’s cover the major changes, being as polite as one can with such a bizarre situation. Having now done some research into this. Ebikes are everywhere. We gave up counting after two hours at 500+. Granted, it was a Sunday. Sales of bikes went up last year by 36%, just 2% to non electric bikes. Based on this, that’s around €13 billion in sales according to figures released.

It’s great that people want to get out and about but it’s not helping the waistline. The diet is not quite going to plan here but there are people wearing Lycra on these ebikes in sizes we did not realise could be made. The sizes must come in BGS and not XX – that’s beer gut size by the way. They need to upgrade the cycle paths as there were some near misses when people were passing – enough said. we did see one cycling accident due to this.

The next issue was the smooth bitumen paths in France had given way to Sectioned concrete made with a stone mix. This creates a dip or rise at each join. Basically, with 200 of these each km, we were exhausted when we reached Merzig. Our knees, wrists, shoulders all ached. We are on roads from tomorrow so that may help!

We saw a cyclists picking something from a tree, so stopped to investigate. It was mirabelles, a type of plumb. We helped him fill his basket, and he gave us some ripe ones to eat – lovely sweet ripe red fruits. Also paused a couple of time for blackberries. We have been keeping an eye on them for five weeks, and finally they are perfect. 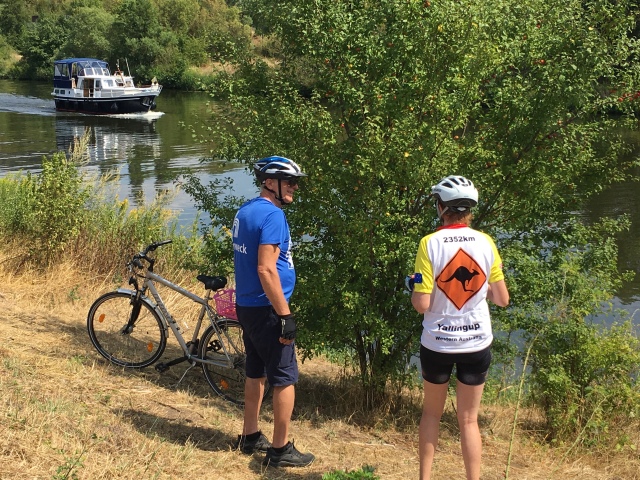 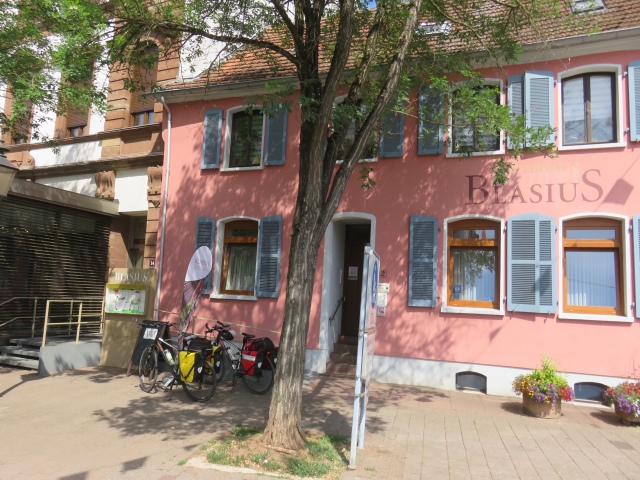 Arrived at our perfect accommodation at 3.30. The Chef and owner greeted us. Our room with balcony was on the lower floor, bike rack, two large beds joined with two quilts- perfect. He then said he knew the exact beer we needed and as we took the bags into the room, he turned up with these we love him! BTW the beer mat is to stop wasps. 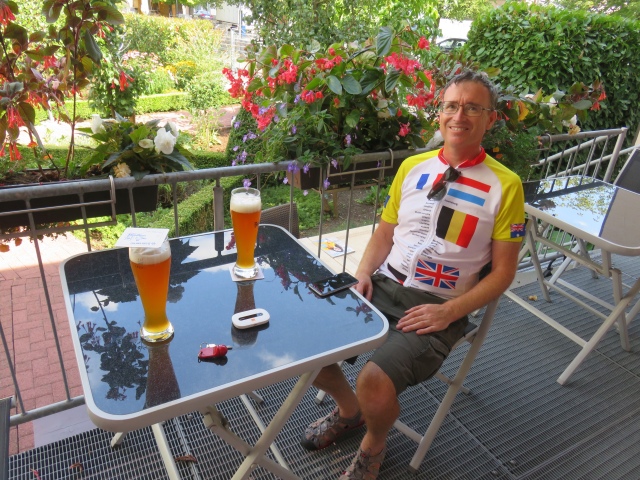 Had a wander around the town, which was very nice considering what we had cycled by. It was quiet. We had a delicious meal at the restaurant and fell into bed at 8pm.