Today will go into the top three worst ever rides. Sodding awful in so many respects, there isn’t the time or energy to go into them all. Suffice to say, when Duncan and I were planning this route, we spent longer on it than any of the others and it would seem we still didn’t get it right. What would have been right, is to skip this country altogether until Ghent by turning left at Barr and cycling to Champagne and then up in Belgium at the end. Too late for that now. Here is what we did.

A sure sign that cycling across the widest border to border of Belgium (or Belglum as we now know it), was that we have seen just one other touring cyclist and in fact, on this ride, which was too long, 3 cyclists total.

So, here is how it went. We set off from our fantastically comfortable house, turned left and headed up a hill. Those gradients don’t look much but the numbers on the left are 100m each. For those at home in Yallingup, this was the same as riding from bottom to top of Hayes Road and back from Vasse Yallingup Road three times an hour + a bit of Yungarra – 250m every hour for five hours in a row. Now add drizzle for the first 28km and heavy rain for the next 30km and torrential rain for the final 20km. Here are some photos when we had breaks in the drizzle part of the day.

Plenty of reminders about the war in towns and villages. Resembles the north east of the UK in many respects, rolling hills, slate and stone houses etc.

The Ardenne is pretty much pine plantations as far as the eye can see. It could explain why there isn’t bird song but then there are some native patches of forest – not a tweet was heard. After France and non stop birdsong everyday, we found this eerie. Then we start to see the shooting podiums, all numbered, for dozens of kms. So, the photo probably explains the lack of any life (we did see a red squirrel run across the road).

On top of this were off road muddy tracks, terrible road surfaces and the icing on the cake – the most stupid, arrogant, dangerous drivers experienced. It was terrifying. Imagine driving at 120kph in foggy, seriously torrential rain on bends or at any time. We both had our front and back lights flashing and we both wore our new bike rain ponchos which are dayglow yellow and can be seen from Mars. Cars and trucks raced by us, drenching us and some giving us barely half a metre clearance. Julie considers the Belgians are so boring in their daily lives that they need to get behind a wheel and drive like a dickhead (this is Julie’s toned down version). It is also no surprise that the two best countries to cycle in have been Spain and France and the worst Belgium and England. The first two having the 1.5m rule and signs everywhere instilling the care into drivers. It is quite obvious to us that this works. Australia is a work in progress.

We had no choice but to use an N Road. We would have needed to extend the trip by three days to join up to various cycling routes as in the east they only seem to have circular routes. Perhaps given the awful weather, the cycle routes wouldn’t have been useable anyway as the small amount of kms we did on them were quite soggy and uneven, other than one very pleasant stretch along a river that on a sunny day would have been glorious. 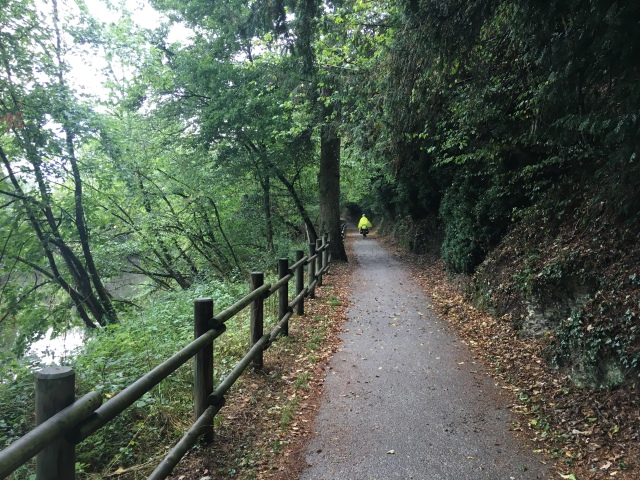 At the 28km mark, we reached a fancy looking restaurant. This was the only place anywhere that was open and it was 12.15, so they were happy to make us a coffee and hot chocolate before lunchtime guests arrived. We had found a patisserie earlier on and enquired whether they did coffee, which resulted in definite “non”. Seeing as it was wet, miserable and there were no other people in the village or for ten kms around, you would have thought there could have been several other responses, such as “sorry, we don’t do coffee” or “there is coffee here or here”, but no, this is NOT France, this is Belglum. 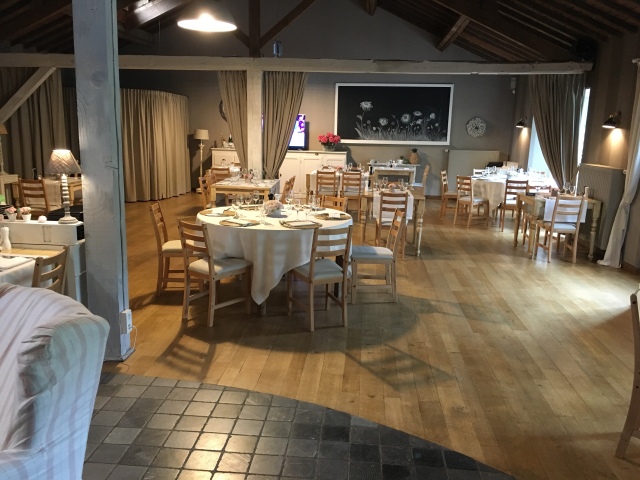 We found a large tree next to a church in one village and ate our packed lunch – still raining.

Unfortunately, no further photos in the rain. As it happens, the camera has water in it and that could be a problem. It was in a bag and covered with the poncho but we were totally drenched as we got water up from the road. Our heads and bodies were kept dry. The best bit was the water gathered between the handlebars in the poncho and when a big truck went past in the opposite direction, it blew up the poncho and threw the water into our faces. It wasn’t ideal for the trial run of gear.

We coasted down into Dinant in heavy rain, to our cheap accommodation at a Panamanian bar. Hardcore smokers under a patio umbrella watched as we carted our bags, then bikes, up a narrow, steep staircase to our rooms. Yes, the damp bathroom is down the corridor from the dark bedroom. The first place without a hair dryer, so our sodden clothes will remain so. It is, however, immediately next to the number one attraction in Town – the spot where the road squeezes between a crack in the rock face that towers over our room. 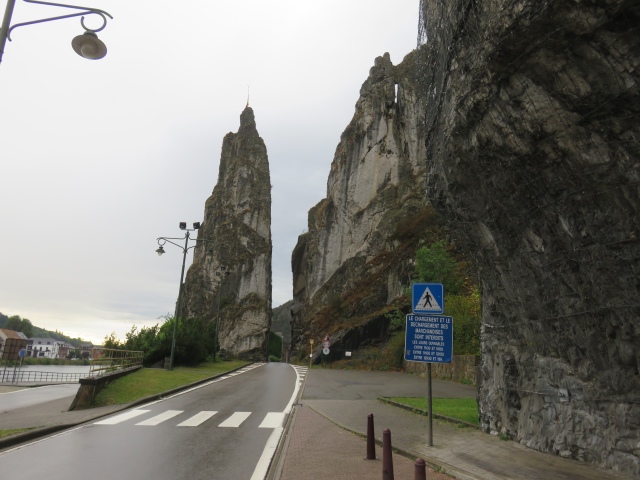 We trudged by this as we went to an Italian bistro for dinner, and ended up chatting to some Belgians, including a Chimay beer salesman. Sadly no samples.

Correction : it appears Germans are much slimmer than we thought – it must just be the corner we were in. Actually the French are more obese, and don’t mention Australia 😦