Better to concentrate on Ghent rather than the ride to Zeebrugge. We spent a good couple of days seeing the sights and having lunches and dinners out. Ghent is a lovely city and we feel a lot less crowded than Brugge.

It was lovely to catch up with Belinda and Paul who came over from Kent to meet us. We are just sorry that the weather was so miserable. We are over the weather. It’s pretty much rained every day whilst in Belgium – another reason to tick this country off and no likelihood of returning.

The tour we did of the Gravensteen Castle was a highlight, mainly for the fantastic English commentary we received which wasn’t actually about the structure but rather the people over the centuries that lived there. Hysterical at times, especially the toilets and love life of Philippe of Alsace. To quote, “the taxpayers could watch the count do his number two and see impost turned to compost”. 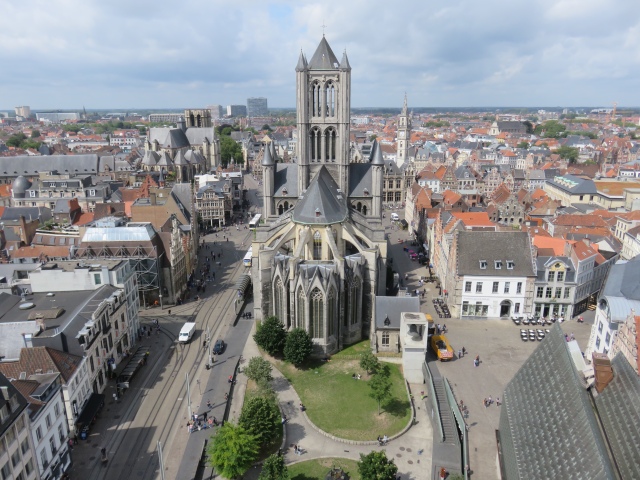 Belinda, Paul and Duncan climbed the Belfort Tower. The views were quite spectacular from up there.

Gorgeous buildings everywhere. Well worth a visit but it’s not Belgium, just one of two must visit cities.

Below is the route, made just a little more awful cycling through the centre of Brugge in a downpour.

As we were leaving Ghent, there was a couple looking puzzled at the start of the cycle path. They asked us where we were going and we said Brugge. They were English, no GPS, no cycling maps. They were about to set off in the wrong direction. We cycled a little way with them. Their first outing on a long distance bike trip . Good bags but no proper clothes or even gloves and they had ridden 100km the day before having not been on bikes in two years! Needless to say, sore bums.

Brugge was crowded even in the rain. We were surprised by this as we visited two years ago and it was reasonably quiet by comparison. Then we remembered what a French camp site owner told us. The two weeks before school holidays start, everywhere is empty. That’s when we were there. So, a note to those with no kids in tow – go then. 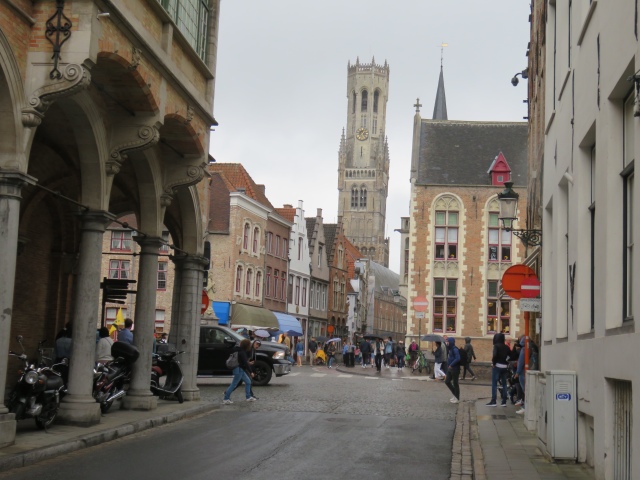 A very wet and breezy ride, mostly canal. Zeebrugge itself is like a terrible beach resort with a row of high rise apartments on a vast beach. It all felt rather glum – the sea end of Belglum. Had a rather strange meal which we had to cook ourselves at the table. Reached the ferry by 4.30. We were fast tracked with 4 other cyclists by all the cars and had to ride up the steep ramp to get on. Bikes secured.

Into our cabin. Didn’t know what to expect having never been on an overnight ferry. I expect it’s something like the Trakka but no kitchen facilities.

Met Stefan from East Germany, who was cycling to Newcastle from Hull. It was on his bucket list, having visited 32 years ago. He said he loved the people but he didn’t understand a word they said. We had an enjoyable couple of drinks before an early night. Gale 4-5 winds but very smooth crossing and we both slept well.

Sitting at the dock waiting to disembark. We could see Grimsby coming in with its 1852 replica Sienna tower, built by the Italians. Looks pretty spectacular from the ocean. The. The Humber Bridge came into view, which we will cycle over later.